Global logistics company Samskip has completed a major environmental protection project through subsidiary frigoCare, installing the largest solar panel system in the port of Rotterdam as part of its Sustainability Strategy.

The initiative has been undertaken in partnership with Dutch renewable energy company Zon Exploitatie Nederland (ZEN), working in close cooperation with the Port of Rotterdam Authority. 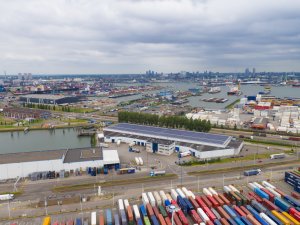 The record-breaking green energy system has been installed on the roof of frigoCare’s 14,000 pallet-capacity cold-store in Rotterdam. In total, some 3,100 solar panels have been fitted, covering an area of 7,500m2 and capable of generating 750,000kWh of electricity a year. This would be enough to meet the average annual energy needs of 250 family homes, significantly reducing the carbon footprint in Europe’s largest port.

On its own, the installation therefore increases the amount of energy being generated by solar power in Rotterdam – currently 3 GWh, according to municipality figures – by 25%. The 2018 goal for Rotterdam is 20 GWh, and 1,000 GWh by 2030.

The new solar panel installation is owned by ZEN, while the roof’s surface is provided by frigoCare. In turn, frigoCare benefits from access to a cheaper, and ‘greener’ energy supply. The cold-store uses around 2.7 GWh of energy a year. Under the agreement between frigoCare and ZEN, the solar panels will meet around 30% of this requirement. Any excess power will go back into the local electricity grid.

frigoCare invested around 650,000 euros in renewing the cold-store roof before the installation of the solar panels, ensuring that it utilised the latest, most efficient means of insulation and roof covering. frigoCare Managing Director, Jan Bouman, says: “When we upgraded our cold-store, which is primarily used to store frozen fish, we wanted to make it as environmentally friendly as possible. The partnership with ZEN has enabled us to reduce our annual carbon emissions by around 325 tonnes a year. It is an example which we hope others in the logistics and transport industry will follow.”

The solar panel installation, which cost around 1 million euros, was completed towards the end of July this year. It is expected that this investment will be recovered within a 10-year pay-back period. An official opening ceremony will take place on September 2nd in the presence of local dignitaries, and frigoCare and Samskip clients, just before the so-called World Harbour Days.

ZEN Director and Founder, Michel Peek, says that this is a ground-breaking initiative, not just for the port community, but for the entire city. He says: “Rotterdam has great ambitions to be a green city, but has not so far been that successful, ranking low in terms of solar power generation amongst all Dutch municipalities. With this investment it will rise significantly up that list, and we hope this project will provide confidence for other similar installations in the months and years to come.”